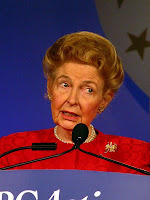 Historian Frances Fitzgerald in an article during the first year of Ronald Reagan's Presidency wrote on The Triumphs of the New Right New York Review of Books 11/19/1981. She discusses figures like Phyllis Schlafly, Richard Viguerie and Chester Ward, who wrote far-right books with Schalfly on defense. Fitzgerald explains their different isolationist-hawkish take on the Vietnam War from the one generally favored by the neoconservatives. It's a view that was popular inn the political orbit of far-right "anti-Communist" groups like the John Birch Society:

The Schlafly-Ward explanation of the Vietnam War, for example, is that the United States fell into the trap the communists laid at the Tonkin Gulf. The plan of Nitze, McNamara, and Kissinger was to make sure that the United States did fall into it so as to create the necessity for building conventional, as opposed to strategic, weapons. This would ensure a US surrender before an eventual Soviet nuclear ultimatum. The "gravediggers" — so the theory spins — escalated the war very slowly in order to allow the communists the time to build their nuclear forces; in releasing the Pentagon Papers Daniel Ellsberg (of "the Ellsberg clique") promoted the spurious notion that the conspirators were trying to win the war — and thus helped them to cover their tracks.

This theory about the Vietnam War is one commonly held in the ranks of the New Right —though not one articulated by sophisticated spokesmen like Viguerie. What is most interesting about it is that it is so much at odds with the analysis of the neoconservative intellectuals in Boston, Washington, and New York who write in Commentary or frequent the Georgetown Center for International and Strategic Studies. Neither Phyllis Schlafly nor Richard Viguerie, nor to my knowledge any member of the New Right, believes that going to war in Vietnam was a good idea. They believe that having gone to war, we should have won it, not with American boys (the veterans figure large in their constituencies), but through the concerted use of air power. As George Wallace's running mate, Curtis Le May, put it: Let's bomb them back to the Stone Age. The idea that we should have saved the Vietnamese from communism appeals to them vaguely, if at all.

The point is an important one, for it suggests the gap between the views of Schlafly and those of the bright-eyed stab-in-the-back theorists issuing forth from the Georgetown Center and other centers of neoconservative learning. In fact, the New Right has no foreign policy in the usual sense of these words. The Helms-Viguerie-Schlafly view of the world is that of fortress America (its ramparts now crumbling) surrounded by a pervasive but elusive communist conspiracy and completely friendless except for the Taiwanese, the white South Africans, and (this being a fundamentalist idea) the Israelis.

This is why I'm very cautious today about the allegedly antiwar and anti-militarism views of the "libertarian" far right. Often their antiwar sentiment is founded in a paranoid, inaccurate, militaristic and unilateralist views such as the ones Fitzgerald describes in that quote.