One of my more irreverent Facebook friends on the East Coast just posted that the mega-snowstorm has only been going on a few hours and the Baptists are already showing up to steal their babies.

The Miami Herald has a good background article on the problems that Haitian "orphans" have been encountering in recent years: Haiti 'orphans' face a life of neglect and pain by Scott Hiaasen, Kathleen McGrory, Jacqueline Charles and Trenton Daniel 02/05/10. [02/06/10 - The link to this article at the Miami Herald appears to be temporarily broken. The first few paragraph appear at the McClatchy DC site.] The orphanage business there can get really ugly. Including ones that call themselves Christian:

Haiti's record before the Jan. 12 earthquake showed just how vulnerable to abuse the country's children have been. Consider:

• In September, U.S. prosecutors indicted Douglas Perlitz, a Colorado missionary, on charges that he used food and gifts to extract sexual favors from teens at an orphanage he ran in northern Haiti. The orphanage was financed with donations from a Connecticut church group. Perlitz has pleaded not guilty.

• Two years ago, two Canadian aid workers were convicted in their home country of sexually abusing boys at an orphanage in southern Haiti.

• In 2007, the International Organization for Migration discovered 47 children who were solicited from their parents by the operators of a rogue adoption center in Port-au-Prince.

• That same year, Haitian police arrested the operator of an orphanage housing 32 children being offered in black-market adoptions.

I first came across that article via an aggregator site that I just found out about, the Haitian News Network.

Apparently it's dawned on the Southern Baptist Convention (SBC) officials that this is not good publicity for their denomination, as the A********* P**** reports in Baptists concerned Haiti arrests may hurt image by Travis Loller Idaho Statesman 02/05/10. Duh!

At the SBC Web site is an article providing the text of a letter to President Obama that is clearly but not unambiguously defending the dubious group of white Idahoans busted trying to take 33 Haitian children out of the country illegally last weekend: In letter, Baptists ask Obama to aid 10 held by Haiti 02/05/10. My own first reading of this letter is that the SBC would like to get those Idaho Baptists sprung from jail and put this story to rest before it draws too much scrutiny to other orphanage and adoption services being run by conservative Christian groups dealing with Haitian children.

Richard Land, a top SBC officials and one of the most influential leaders of the Christian Right, sent his own separate letter: Land: Haiti govt's behavior 'outrageous' Baptist Press 02/05/10. Land's letter puts a different spin on the SBC's position than the A********* P**** story gives it.

"The Haitian government is receiving massive assistance from the United States, from both public and private sources," Land the president of the Southern Baptist Ethics & Religious Liberty Commission, wrote to Obama. "Our nation's churches are giving hundreds of thousands of dollars to relief efforts for the people of Haiti. These fine Christian men and women sought to do even more to help alleviate the suffering of some Haitian children. For the Haitian government to respond in this way to the obvious good intentions of these honorable Christians is outrageous. [my emphasis]

Before I saw the Land article, I would have said that I hadn't seen anyone making an outright pitch that these accused kidnappers are white Christians being persecuted for their religion by a bunch of black voodoo-following, Devil-worshipping Haitians. Of course, Land didn't explicitly put it that way. But the framing of this one isn't ambiguous, though the other SBC letter is. Land is explicitly saying these are "honorable" Christians with good motives and that their arrest was illegitimate.

It says a lot about Land, not much of it good, that he would so enthusiastically endorse such a dubious undertaking.

But you can also see the outlines of that framing of the issue in the first SBC article linked above and the milder letter to the President. It's also not far below the surface of the latest statement from the Central Valley Baptist Church in Meridian, Idaho, that was sponsoring this particularly strange international mission program: 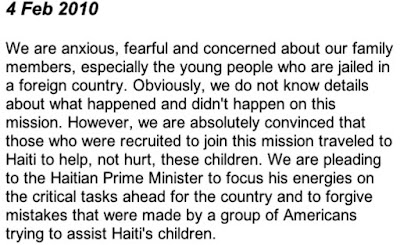 It's perfectly natural for the families and friends of those arrested to try to put the best face on their actions. I would be doing exactly the same thing if a relative or friend were in that situation. And it's part of the duty of the State Department to monitor situations like that and do what's possible to protect the rights of Americans detained.

But if these Idahoans were well intentioned, their good intentions didn't include a minimum sense of responsibility. It especially disingenuous for the church to talk about their special concern "for the young people who are jailed in a foreign country." This sounds like a typical paranoid-conservative projection. None of the ten Idaho "missionaries" is a minor. But they attempted to take 33 children, ages 2-12, out of Haiti in a manner that at very best recklessly put the safety of the children at risk. That kind of screaming hypocrisy will work fine if their goal is whip up a frenzy among Christian Rightists and white supremacists. But it's not very likely to work in the favor of the 10 sitting in jail in Haiti.

The SBC's news service is also running a story that includes a ringing defense of the group by the pastor of a Kansas church that one of the group attended: Attorney asks for release of volunteers by Erin Roach 02/05/10. That piece also quotes the SBC's North American Mission Board making it clear that the Idaho operation was not one of theirs but nevertheless defending them. The group's interim president says, "We believe the mission team had the best intentions for the children they were transporting." Exactly why would he believe that? The story doesn't say

Loller's AP story reports a statement by an SBC official not included in the SBC news article linked above:

The Christians, most of them Southern Baptists, weren't acting under the auspices of the Nashville-based Southern Baptist Convention, when they were arrested Jan. 29 while trying to take 33 children out of Haiti. Even so, Vice President of Convention Relations Roger Oldham said, "Clearly there is a concern that, because of the acts of this one team, our tremendous history of relief over the years would be tainted in some people's minds."

The Southern Baptists' Disaster Relief ministry is the third-largest relief organization in North America, according to the convention. Oldham said Friday that more than 90,000 trained disaster relief volunteers are ready to assist Haiti with earthquake recovery as soon as they are invited in by the Haitian government. [my emphasis]

Which raises one of the biggest questions about this "mission": why would an individual Southern Baptist church whose members genuinely wanted to help in this emergency in Haiti use their own separate mission program when the denomination has established, experienced resources of its own to which they could contribute.

It would be interesting to know if the SBC's Disaster Relief group would have accepted anyone on the Idaho team as a volunteer. I've yet to hear that any of them had any relevant skills for this situation. I also wonder why the Haitian government hasn't yet approved the official SBC group to enter the country yet. I'm sure this cowboy mission from Idaho didn't inspire confidence among Haitian officials. But is there more to it than that?

I'm also intrigued by this language in the SBC letter to Obama:

We ask, therefore, that you use all means necessary to secure for these mission volunteers the medical treatment and spiritual counsel that they need while imprisoned, and that you arrange for a representative from their churches or from the Southern Baptist Convention, or both, to visit them in Haiti as soon as possible. Upon their release, we also ask that those representatives be allowed to accompany them home to provide pastoral care and spiritual encouragement. [my emphasis]

There's no point into splitting hairs over individual phrasing. But it sure sounds to me like the SBC is trying to take ownership of this situation and hush it up, while at the same time trying to avoid any damage to their brand name or any legal liability.

Just to be clear, brand identity and legal liability are perfectly valid concerns for the SBC. And in itself, it's good to see that the denomination seems to be taking an active role in intervening for these unofficial missionaries.

But big questions remain as to what they were doing there. And I sure hope some competent reporters follow up on the claim that Patrick Mahoney of the far-right Christian Defense Coalition that he had worked with members of the sponsoring church in Idaho on past projects. I'm also curious why the SBC leaders decided to go with two different letters to Obama. Land's is much more explicit in defending the kidnappers. Is this kind of like when the Supreme Court has concurring opinions? I'm guessing it's something like a two-track strategy: protect the brand but set up the political issue as "persecuted Christians" and victimized white people.

Monica Potts at Tapped has a good post on this, on which I commented there: Helping Haiti With Arrogance 02/05/10.