... to those long-ago days when TV news was actual news instead of bad infotainment. 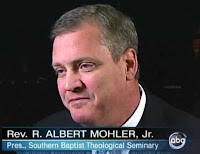 ABC News actually did a segment asking questions about what's up with the Christian adoption business with Haitian children, putting it in the context of the white Idahoans who got busted trying to take 33 children out of Haiti illegally: Saving Haiti's Children 02/03/10.

This report raises some real questions, not just about this very suspicious Idaho group, but about how Christian adoptions of Haitian Christians children were being carried out even before the earthquake emergency.

This segment features our friend Brother Al Mohler, one of the most prominent honchos in the Southern Baptist Convention, seemingly defending the whole enterprise and, at least by implication, the Idaho crew. He makes it sound almost like a civil rights project. And Brother Al doesn't seem to think that the Librul Media quoted him out of context, because he posted a link to the segment on Twitter:

Brother Al also put out a defense of adoptions in Haiti at his blog: Adopted for Life ... and in Death 02/03/10. His blog post comes days after the arrest of the white Idahoans, and it doesn't so much as mention the case. Instead, it's a maudlin defense of foreigners adopting Haitian children. According to the ABC News report, even before the earthquake some of these adoptions were of children that had parents and were giving them up for American adoption. And it's clear that less missionary-oriented adoption services think even the technically legal practice is often downright unethical. Does Brother Al mention any of this in his article? No. But he assures his readers, "Adoption is perhaps the most powerful depiction of the Gospel found in the Bible."

There's a larger story here. The very fact that a high-profile Southern Baptist like Brother Al is defending the Idaho kidnappers, albeit very cautiously and by implication (but clear implication to those following the story), tells me that more is going on here than one quirky Southern Baptist church in Idaho setting up there own international mission to help little black children in Haiti.

Responsible government agencies and the press need to start taking a much harder look at the adoption business run by conservative Christian groups. I posted earlier about this story concerning Christian adoption services called "crisis pregnancy centers" targeting young mothers who don't want to have an abortion but who initially feel unable to properly care for a child: Shotgun Adoption The Nation 08/26/09. Some of the practices reported there are ugly.