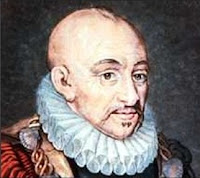 Michel Eyquem de Montaigne (1533-1592) was a French Catholic Skeptical philosopher and humanist whose skepticism was focused not on external reality as such, but on opinions and individuals. But his perspective did incline him toward empirical investigation, including reflection on one's own mind and body, as the most reliable path to knowledge. A man of the Renaissance, he is credited with originating the literary form of the essay and became an important influence on Enlightenment philosophy.

His thought drew heavily on classical philosophy, especially Pyrrhon von Elis, Sextus Empiricus and Cicero. His version of Skepticism was to deliver "a good whiplash to the ordinary stupidity of judgment." His Essays were considered disturbing enough to sacred truth to warrant inclusion on the Catholic Church’s Index of forbidden books in 1677.

For philosopher Richard Popkin (1923-2005), Montaigne was a leading intellectual figure of the Counter-Reformation who looked to protect religion against the dangerous reach of philosophy.

His perceived irreverent attitude toward religious dogma contributed to his influence on Voltaire, Diderot and Jean-Jacques Rousseau in the 18th century. Stefan Zweig said of him, "Montaigne helps us answer this one question: 'How to stay free? How to preserve our inborn clear-mindedness in front of all the threats and dangers of fanaticism, how to preserve the humanity of our hearts among the upsurge of bestiality?'"

Max Horkheimer used Montaigne as a touchstone of his long essay "Montaigne und die Funktion der Skepsis" Zeitschrift für Sozialforschung 1-2/1938, whose English version the English synopsis in the journal gives as "Montaigne and the Changing Role of Skepticism".

Horkheimer's essay covers three major themes: situating Montaigne in his historical and intellectual context; a consideration of Protestant ideas of reason; and, a description of the changing social role of Skepticism.

He argues that Montaigne's brand of Skepticism served him well in the context of the Protestant-Catholic struggles in 16th-century France, struggle which took a particularly violent turn in the St. Bartholomew's Day Massacre of 1572, unleashed by the Catholic Catherine of Medici, powerful Queen Mother to Charles IX against the Protestant Huguenots . Barrington Moore, Jr. gives this description of it in Moral Purity and Persecution in History (2000):

Between them Catherine and the king gave their royal blessing to the massacre. Charles IX is reported to have announced, "Kill them all," thus making mass murder legitimate. The citizens of Paris, especially the disreputable segment of the poor, responded with glee, grabbing "suspects" and hacking them to bits with any means available. Except for being authorized and legitimate, the massacre was utterly spontaneous. Small groups without any overall coordination and no connection with one another did the killing. In that sense this collective murder was premodern. A work of mere manual labor, without twentieth-century social organization and technology for mass slaughter, the Massacre of St. Bartholomew still managed to destroy several thousand lives.

In this environment, Montaigne's sense of religious tolerance (he himself was Catholic) made his Skepticism a progressive idea. The classic liberal demand for tolerance in matters of conscience, i.e., freedom of religion, was directed at prevented incident of horror like the St. Bartholomew's Day Massacre and the Wars of Religion of that century, and even more so the Thirty Years War of 1618-48. Montaigne was an important figure in formulating that demand for tolerance. His position also served him well in navigating the hazards of religious sectarianism. He even served as a mediator between French Catholic and Huguenots, with the blessing of the Holy Office in Rome, aka, the Inquisition. 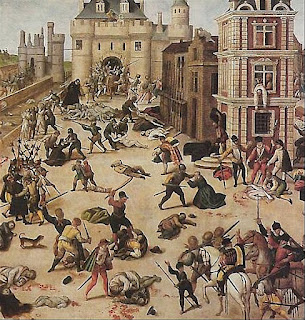 St. Bartholomew's Day Massacre
Horkheimer praises Montaigne’s influence on the understanding of Reason by Rene Descartes, Leibniz and Immanuel Kant. By contrast, he considers the ideas of the leading lights of the Reformation as "inhuman". Luther, he argues, emphasized inner freedom as corresponding to outer subservience. And he managed to reconcile "Christian love and equality" with "suppression, plunder and mass murder", the latter referring especially to Luther'’s belligerent position on the side of the princes in the Peasant Wars. On the other hand, Luther's dedication to bring the Word of God to ordinary people in their own language nevertheless brought a critical function with it, the idea of the priesthood of the individual believer which inherently implied a capability of judgment on the individual’s part that could be at variance with established authority.

Calvin, he says, in his teaching of predestination, "reduced the concept of freedom to almost nothing". But as anti-religious as he is, Horkheimer notes, "In the entire period of early capitalism, from its emergence of the begging orders [of monks] into the early years of the 19th century, the Gospel possessed not just an explanatory but also a revolutionary meaning." Christian figures like Thomas Müntzer, the most famous peasant leader in the Peasant Wars, found such revolutionary impulses in the Bible that the Reformation made more accessible to them. But, as Horkheimer also notes, in this sense "the Gospel is the negation of Skepticism, according to which actions are matters of taste or a question of individual cleverness." Establishing tolerance in religion required revolutionary changes. But revolutions by their nature require intolerance against the existing order, albeit of a different kind than religious intolerance such as that of Catherine de Medici.

"With the disappearance of liberalism in the period of monopoly capitalism," writes Horkheimer, "Skepticism once again changes its meaning." He refers here to the period of roughly 1870-1900, which is generally recognized as the period in which business monopolies came to be a dominant economic form in leading capitalist economies, including that of Germany. The liberalism Horkheimer refers to as disappearing was the classical liberalism of free-market capitalism which had been the leading ideology of capitalists in the 19th century. In Horkheimer's case, he saw the rise of fascism in Italy and Austria and of National Socialism in Germany as the surrender of the general concept of liberalism in political matters by its natural advocates, the capitalist class. And he feared that such authoritarian forms of government could become the preferred and characteristic form of capitalist rule everywhere. Here he pessimistically calls the Leader's State (Führerstaat) the "most characteristic form" of the present-day capitalist state.

Here Horkheimer makes a quirky and not very well-developed argument that in the present-day state, by which he apparently means the Führerstaat form, it is not possible for individuals systematically to develop the kind of well-established personal ego on which the entire Skeptical orientation depends. He says of Montaigne’s time, "The positive form of Skepticism is the individual." But he argues that kind of individualism required for meaningful Skepticism only develops accidentally in the conditions of the totalitarian Führerstaat.

What he seems to be saying is that present-day dictatorships have such wide-ranging abilities to enforce conformity on the individuals subject to their rule that, unlike Montaigne using his personal Skepticism to navigate the treacherous times of the 16th-century Wars of Religion, such an individual manner of adjustment is not practical in the conditions of the dictatorial Führerstaat:

[The madness of Skepticism stands out in that it regards the ego as a secure place of retreat, despite everything. It {the ego} is bound up with its material reality in every fiber. The capabilities that constitute it – senses, memory and understand – don't depend only on a well-functioning body, but also on a continually progressing social process.]

He is basically arguing that the Führerstaat invades all aspects of the individual's life. And its conditions call for an all-or-nothing choice. Either you decide consciously to conform or you decide that a radical change is needed. "The ego can now defend itself only so far as it seeks to defend humanity in general, as well."

But he also argues that a form of Skepticism does in fact exist among people in conformity with the Führerstaat, a degraded version that comes down to cynicism about the possibility of change. Presumably he refers to the attitude of many people under the Third Reich that is now referred to as "inner immigration"”, a withdrawal into oneself. With particular reference to this degraded brand of thought, he writes, "Skepticism is a sick kind of intellectual independence; it is immune to truth and to untruth."

The best part of Skepticism, he argues, was taken up by Hegel's dialectic, a variant of which is contained in the brand of "critical theory" represented by the Frankfurt School.

This essay of Horkheimer's seems to wander around more than others of his I've read, possibly reflecting a dissatisfaction at the incompleteness of his argument about how the Führerstaat makes Skepticism an unrealistic and reactionary approach by stunting the development of the individual ego. Still, his essay is a provocative one containing some valuable observations and arguments. And, more than previous essays of his in the ZfS, it reflects the increasing urgency with which he regarded developments in Germany.