Argentina's Catholic Church and the dictatorship of 1976-83

But in La mano izquierda de Dios he also looks at the role of the Vatican, which became an important player in a network of relationships involving the Argentine dictatorship when Ronald Reagan became President. St. Reagan partnered with Pope John Paul II not only in opposing the Communist regimes in Poland and eastern Europe but also in the Central American counterinsurgency movement his Administration conducted in Central America, with El Salvador, Nicaragua and Honduras being particularly affected. 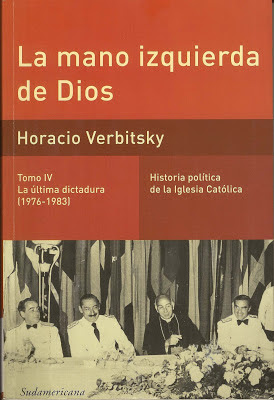 Bergoglio comes in for criticism in this book, though he was by no means the worst among senior officials in their collaboration with the dictatorship. There have been three main concerns about Bergoglio's role during this period that have been publicly discussed this year: his role in the arrest and torture of Jesuit priests Franz Jalics and Orlando Yorio who worked in a project in a very poor neigborhood and who Bergoglio very likely fingered for arrest, though there wasn't the slightest evidence they were involved with guerrillas or any criminal activity; his promotion of the career of Massera, pictured on the cover above; and, his membership prior to the coup in the Peronist paramilitary group Guardias de Hierro (Iron Guard) some of whose members played an important role in supporting the coup and with which Massera was closely associated.

One of Bergoglio's/Pope Francis I's more visible and attractive defenders on criticism of his role during the Argentinian dictatorship of 1976-83 is Nobel Peace Prize winner Pérez Esquivel, who himself was imprisoned by the junta for his public defense of human rights. But Horacio Verbitsky, who has been one of Bergoglio's most prominent critics on the issue, has recalled this year that in 2005, Esquivel was saying that Bergoglio had believed that people who did social work with the very poor were "comunistas, subversivos, terroristas" ("Communists, subversives, terrorists")

Esquivel said it on a national TV program when Bergoglio was being considered for Pope in the conclave of 2005. This relates in particular to the case of Jalics and Yorio, who worked in a project in a very poor neigborhood and who Bergoglio very likely fingered for arrest, though there wasn't the slightest evidence they were involved with guerrillas or any criminal activity. The video of Esquivel is on YouTube:

Verbitsky gives an account in the book of the Jalics/Yorio case, in which Bergoglio looks guilty of essentially ratting the two of them out to dictatorship for no good reason.

His account of the participation of the Vatican and its financial network in providing payments for leading members of the dictatorship - don't dictatorships always feature that, if not always with the Vatican's help - and in providing funding for the Nicaraguan contras and their terrorist campaign against the leftwing Sandinista government in Nicaragua, is also particularly interesting. The Contras' cocaine business was probably more important to its leaders than their counterrevolution. The Argentine dictatorship trained Central American death squads with the approval of the Reagan Administration. One of the main players in the financing of the Contras was construction magnate Franco Macri. His son, Maurizio Macri, is now governor of the City Buenos Aires and the leading opposition figure to Cristina Fernández' government. Verbitsky in the book compares Marurizio Macri to Italy's Silvio Berlusconi. Macri's police are currently under heavy criticism for a recent incident in which they attacked demonstrators in a manner that would have made the military dictatorship proud.

Verbitsky's chronological account shows us a picture of a Catholic hierarchy actively collaborating with a brutal dictatorship whose Catholic-national ideology required the Church's cooperation to be credible. The key human rights issues of the desaparacedos, those kidnapped, tortured and often murdered by the dictatorship, and of the babies kidnapped by the military from pregnant female political prisoners, who they kept alive until they gave birth and then routinely murdered them, the Church's record is downright shameful. On the whole, the Church hierarchy covered for the military, repeated their propaganda justifying the disappearances and torture, and mostly refused to even recognize the appeals from parents and grandparents of the missing, much less doing anything of substance to help the victims. An important part of Verbitsky's story is the Church's special ministry to the military, in which priests were frequently taking confessions from torturers, meaning that the Church was extensively informed about the ugliest aspects of the regime the hierarchy so firmly supported. Some priests and Church officials participated in the torture, telling the victims they were getting what they deserve and telling them to cooperate with the torturers.

Verbitsky contrasts this behavior with that of the Church in Chile, which took a notably more active role in addressing human rights violations by the Pinochet regime, showing a clear example than an alternative position by the Church in Argentina was entirely feasible.

As always in such situations, there were active collaborators, which included the main hierarchy and the military priests. Others, including Bergoglio, took as less public and active but nevertheless supportive and often collaborationist attitudes toward the regime. Some priests, seminarians and lay activists defended human rights and continued to work with those in need in defiance of the regime's preferences. Verbitsky relates a number of cases of them being threatened, kidnapped and murdered. The Church hierarchy was typically passive even in those cases.

But as it started to become clear that a transition to an elected, civilian government was coming closer, the Church hierarchy began to careful create alibis for themselves, making more explicit statements of concern about human rights issues while continuing their collaboration.

The Vatican did play an important and constructive role in this period in facilitating diplomatic negotiations in a territorial dispute between Argentina and Chile over the Beagle Islands, which very nearly led to war between the two dictatorships. And the Church also helped facilitate the transition to democracy in 1983. However, it's sickening to read how the Church for years echoed the regime's hate propaganda against "subversives," and then as the transition to democracy approach, started talking up the virtues of forgiveness and Christian charity to the victims of the regime's cruelty, backing the dictatorship to the end and after in their efforts to secure amnesty from any legal accountability for their crimes.

It's also striking to see spelled out the extent to which pre-modern theological ideas and explicit rejection of democracy were so deeply influential in the Church hierachy in Argentina.